Map of the special edition of GTA 5: interpretation and explanation 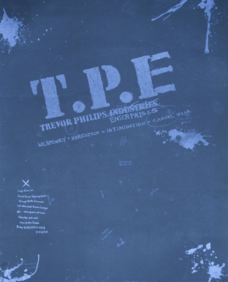 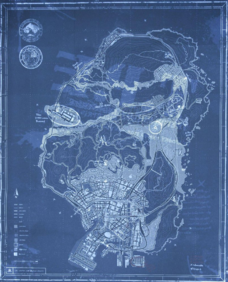 The collector's edition of GTA 5 contains a blueprint that has a hidden message from Trevor including tips, secrets and hints about the places on the map. One side of the map contains the description of way to some place, and on the other a lot of secrets and markup, the meaning of which will be explained below.

Place, which is indicated by the instruction, is an abandoned dock available for purchase. Here is a mini-submarine, and can be purchased several Nuclear Waste barrels.


Invert image map with all notes 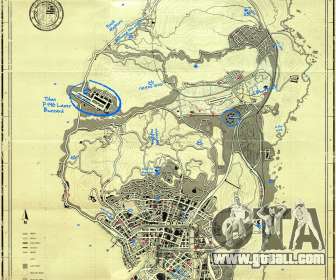 Download a map from the special editions in high resolution

SAFE HOUSE
GTA Online. Properties available for purchase. You can only own one at a time.

Ø GRUPPE 6
Approaching these sites triggers a random event where you can steal money from an armoured car.

SIMEON VEHICLES FOR FAST CASH
GTA online. Simeon will text you a list of cars he needs, you can only bring him one on the list. Damaging the car will decrease the amount of money you will receive. Occasionally he will have a priority vehicle for you to retrieve that will be marked on your map.

TITAN / P.996 LAZER / BUZZARD
Fort Zancudo, An army base where you can acquire Military aircraft such as the Titan (Cargo Plane), P.996 Lazer (Fighter Jet) and Buzzard (attack chopper).

THEY'RE HERE!
Two odd cylindrical buildings covered in alien drawings and symbols with a couple of people doing yoga on the roof. Also a Spaceship Part up the mountain on a ledge.

9A
Extremely difficult to search the BolingBroke Penitentiary, Even with the Lower wanted level cheat. Only item found was a Machine Gun on a raised walkway connecting the 9A building to a watch tower.  It's possible the 9A block is where Trevor believed Brad Snider was being held. The angled wall in the yard in front of building 9a has a message about the random #8s in the game as well as a pic of a island chain similarto the one at the top of the map.

IN THE DRINK
Recommended to approach by Sea, It will reveal an alcove in the hills with a Letter Scrap on a small beach and a Spaceship Part and Grenade Launcher in the Water.

RAIL CABIN
The only item found at this location was a Sawed Off Shotgun.

SW ROOFTOP
National Office of Security Enforcement, smash the gates and climb onto the rooftop to find an RPG and Buzzard (Attack Chopper).

SHOOT FOR THE STARS
Galileo Observatory, Sniper Rifle by a telescope and Body Armor by the electrical transformers.

UNDER THE ROCK FACE
Body Armor on the higher part of the road and a Letter scrap on the lower.

STASH
A small outdoor weed farm guarded by a few gang members. A suitcase with cash can be found inside the shed, which respawns every week.

OPEN GRAVE
A fresh dug plot with a Pistol inside.

FRANK MATHERS
After purchasing the Sonar Collections Dock In Paleto Cove. A Stangers and Freaks mission will become available to Michael. The wife of the deceased Frank Mathers will task you with finding his destroyed Submarine Parts.

BETWEEN THE CRATES
A strange cult community where everyone runs around in their underwear. Be prepared for a fight once inside the compound, Go to the farthest house on the right, on the porch there are an Assault Shotgun, RPG and Armor. Baseball bat is nearby on a rock.
You can also bring an unsuspecting victim to the cult for a cash reward.

CBL-OMEGA-FLYING SAUCER
Carbon Based Lifeform. The symbol next to "CBL" is the symbol for Omega. This most likely alludes to the location to start the "Strangers and Freaks" mission where you help Omega find the spaceship parts.

BRIDGE WITH ARROW
On top of the bridge you will find an RPG.

EXPLOSION IN ALAMO SEA
Simply a Grenade at the end of the Dock.
↑