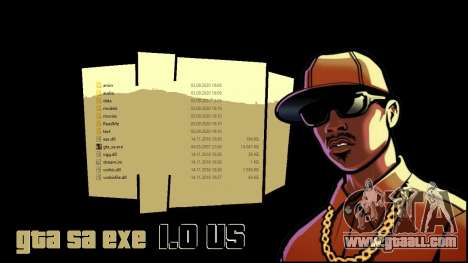 gta_sa.exe 1.0 us is the original US version of the GTA San Andreas launch file. It is with this file that most mods, ASI plugins, CLEO scripts and graphical ENB settings work correctly. gta_sa.exe is 14 383 616 bytes in size and is a public no-dvd 1.0 us version of the game executable. So you no longer need to mount a CD / DVD disc into the drive or into the emulator.

This EXE file is used for both the single and samp versions of the game. It solves problems with not working mods, but since it lacks more recent patches from Rockstar, immediately after installation there may be some problems with the game due to its downgrade to the original version at the time of release in 2005. It's good that all these problems already exist
ready-made solutions, which you will find below in the text on this page.

One-stop solution for problems with the game version 1.0 US:
This script and the mouse will make it work as it should and any resolution available for the monitor will allow you to select and all sorts of bugs and glitches from the developers in the game will be fixed - SilentPatch 1.1.

Thus, after installing gta_sa.exe from this page, it will be enough to install the latest version of CLEO 4.3.22 at the time of publication (if you do not already have it), which already contains the ASI Loader from Silent and then install the ASI plugin - SilentPatch.