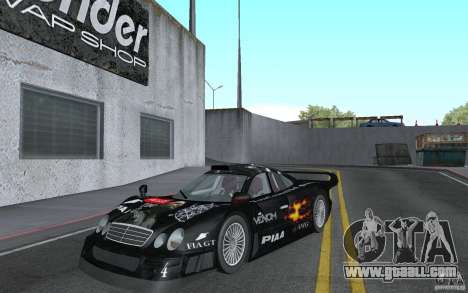 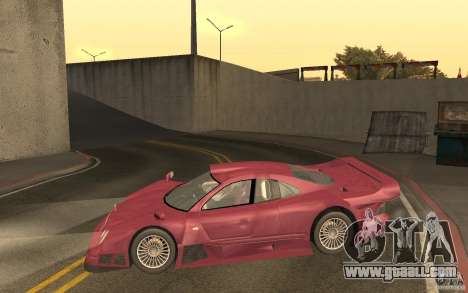 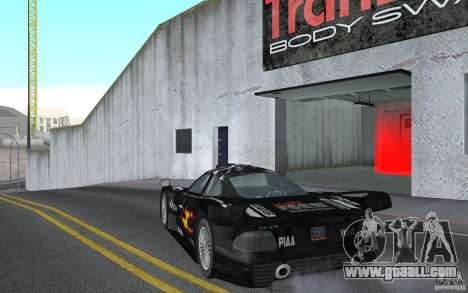 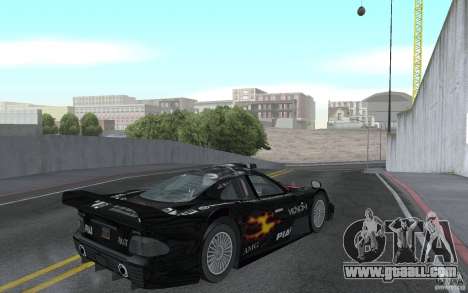 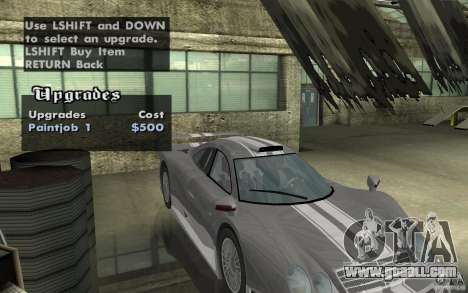 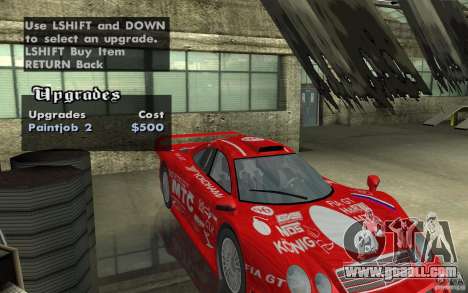 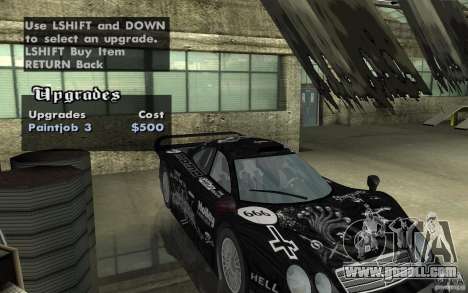 Contains the paint work in Transfendere.

Differences from previous version 1.0.1:-replace model now Turismo (strongly recommended), or to replace any other, but only 2-door model of the car.
-modified carbon material.
-fixed does not work from the previous version.
-new suspension.
new uvw map material, as in NFS Shift.
-new engine concept prototype by AMG for the Pagani Zonda, a roadster version of the CLK is set to GTR.
-updated textures.
-opening of the doors like a real prototype.
-reduced weight model 7000 polygons (2.87 KB > 2.30 KB).

Model features:-2 extras (CD "Disturbed-Indestructible" and rooftop antennas)-detailed material "ugleplastikovoe fiber (carbon). -secondary paint color changes the color of the material car seats-high detailed model. -models with the plugin enb series-painting works (1-Strip, 2-sponsor of the fia gt Championship, 3-subject of black metal, the true 4-Disturbed-style)-post optimization of materials and geometry models-full adaptation under HQLM v2-available brake discs and calipers-chrome and glitter-work light Lantern-compatibility with new original exhausts v1.0.0-compatibility with wild upgrades your cars v1.0.0-Tuning in garažeTransFender.-installation of paint work with new uvw map material-improved quality of teksturMoj award-winning Mercedes-Benz CLK GTR road version moved from Test Drive Unlimited Gold in GTA San Andreas. New modified high-quality model geometry, will repay your look. Like you haven't seen and won't see! history: Date sports car, as well as izgotavlivavšijsâ on the basis of the production model car racing. The road version was released in a limited edition 25 racing homologation model for instance. In 1997, the company Mercedes-Benz decided to compete in the FIA GT CHAMPIONSHIP, but for homologation sportprototipa trebovolos′ to build a game machines adapted for use on normal roads. However to the frenzied temperament Mercedes-Benz CLK GTR is not affected. In fact all the touches were limited to the installation of the air conditioner and more comfortable salon, where many elements were lined with natural leather. In the rest of the car was racing the car at the flesh of the flesh. Many of the technologies used today are not on every sports car. Giant 612-horsepower V12 displacement 6.9 l allows the CLK GTR to a maximum speed of 330 km/h and accelerate up to "hundreds" in less than 4 seconds with the engine connected is a sequential six-speed manual transmission with the Office for details. The chassis was similar to the formula-1 race car ': ceramic brakes and an independent suspension double wishbone, which transmits the shock absorbers and springs through a special system of rocker arms. All were built only 25 copies of the CLK GTR-20 coupes and roadsters 5. But cars put up for auction, really unique. The fact of the matter is that they have the steering wheel on the right-hand side in accordance with the wishes of a customer is the Sultan of Brunei.