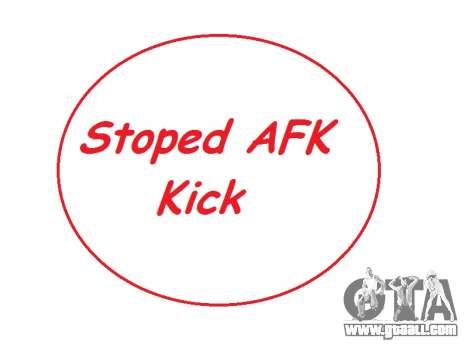 This script prevents kick for AFK Samp-Rp and other servers where there is a AFK system. Works on the principle of expanding the game to the end AFK. This AntiAFK can be safely left on for a long time - works without a glitch, he catches Payday due to built PaydayChecker (ERIE). 4 click you can tailor it to Samp-Rp, or under other server. Also available: Relogger (when Kikyo you from the server/restart of the server the script itself introduces you the password and continues pumping, the main thing to be sobeit or CLEO, where reconnect the Shift+0), Pumping up to 50 akkov and much more.

F. A. Q. USE:
● How the script works:
1. You enter the game
2. Click on the activation (Alt+1)
3. Movements are performed from random (random) style movements, the character enters a customized command (text)
4. The game is minimized and POPs up the message: the Timer is running, do your work
5. Begins the countdown in Statistics
8. When the timer expires, a message POPs up: "Timer expired"
9. The game automatically explodes after 5 seconds
10. All repeats again from step 3 in paragraph 9

● How does ERIE (Emergency Unfolding of the Game):
ERIE is almost the same as PaydayChecker. The condition for ERIE should be included AFK timer, the time server must be the same with your computer. If it worked ERIE, then don'T TOUCH ANYTHING.
So, if the clock of your computer and 59 seconds, then fires an Emergency Unfolding of the Game (ERIE).
1. The game unfolds.
2. The character performs random (random) motion.
3. Waiting for 80 sec.
4. The character performs random (random) motion.
5. Goes AFK
Between this time he was waiting goes by.

● How does reloger:
1. You ciceet from the server
2. The script waits for 20 seconds
3. Comes in GTA:SAMP, reconnected and enters the password
4. Pumping continues...

● What do you need to work relegere:
To Relogger have worked:

● Need for ERIE:
To ERIE have worked:

1) To itself ERIE was activated
2) Order No. pumped akkov was equal to 1
3) To GTA:SA:MP was minimized

● Where to find chatlog.txt
chatlog.txt is the chat log SAMP
Usually it lies in the Documents\GTA San Andreas User Files\SAMP\chatlog.txt